So far we learned how to test our workflows with Touca client libraries, how to run those tests to submit information about the behavior and performance of our workflows to the Touca server, and how to use the Touca server to visualize the differences and receive reports about how our software changes over time. In this document, we will learn how to automate the execution of our Touca tests, to continuously receive feedback about incremental changes to our software.

Automating Touca tests is usually very straightforward. "usually" because this process depends on your software testing requirements and the complexity of your build and delivery pipelines. Since Touca is designed for testing real-world software applications, we strive to provide necessary tooling to facilitate continuous testing of these systems.

There are two main approaches to test automation: We can run Touca tests as part of our Continuous Integration (CI) pipeline or we can leverage a dedicated test server for running the more involved more time-consuming test workflows. We will cover both approaches in the following sections:

We can choose to run Touca Tests as part of our CI pipeline. Regardless of what CI solution we use, we can add a step to our build pipeline that invokes Touca tests with the appropriate API Key and API URL.

If you are using GitHub Actions, create a new repository secret called TOUCA_API_KEY in the "Settings" tab of your GitHub repository. 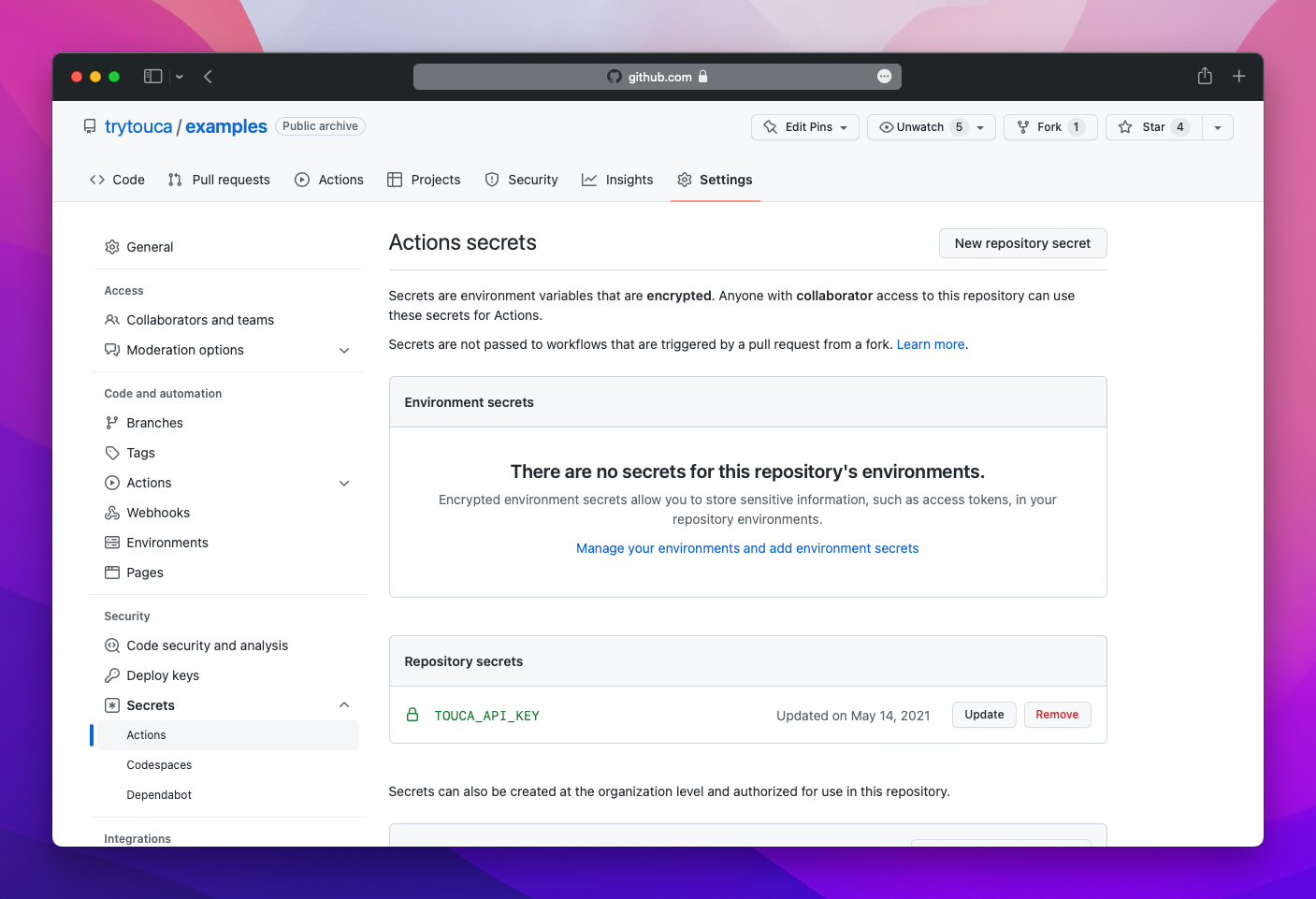 Add the following steps to your GitHub Actions workflow:

Now every time you push changes to the main branch of your repository, your tests will automatically run and submit results to the Touca server.

For a working prototype, check out our own GitHub Actions which includes running sample Touca tests for different programming languages.

Running Touca tests as part of CI is easy to implement but it has important limitations:

We can mitigate these limitations using a dedicated test server. We can use this server for persistent storage of input test data and output test results and running Touca tests on a fixed schedule.

At Touca, we have developed an open-source command line application which includes a test runner to help setup continuous testing pipelines on dedicated test servers. This section walks you through using this CLI application.

Let us imagine that we want to automatically run Touca tests that are packaged as a .msi installer and deployed to Artifactory as part of our build pipeline. Our objective is to setup a testing pipeline that periodically checks Artifactory for newer versions of this installer, pulls new versions, install them, executes the Touca tests, and manages their generated test results.

We start by installing the Touca CLI:

This CLI is primarily developed to facilitate the management of archive files but it also includes a test runner that we can use via touca run.

Where sample.json is a test profile that describes our test setup:

Check out our JSON schema file for a full list of supported fields and scenarios.

As a last step, we can automate the execution of our test using Windows Task Scheduler or Linux Cron Jobs. If we intend to run Touca test for every version of our code, we can use a short polling interval such as 5 minutes. The CLI gracefully exits if there are no new versions of our software available in Artifactory.